They think that everyone in the organization they’re selling to is purely motivated by what’s best for the company.

And therefore, as long as they can make the case for why their service or solution is good for “the company”…

But that’s not how it works, ever.

Even if your buyer has the organization’s best interests in mind, which hopefully is the case if you’re speaking to a decision maker…

That shouldn’t be too hard to digest.

When they sign a deal with someone like you, they’re looking for some kind of gain, reward or status.

They want to look good among their bosses and peers.

They want to be seen as the leader who brought about positive change when things were going south.

They want to be rewarded for the outcomes you’re going to deliver because they were the internal champions.

And they should be, for putting their neck on the line and writing you that check.

So the question you need to be asking is…

What’s in it for them? 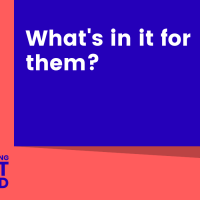 Get professional services marketing tips delivered to your inbox.